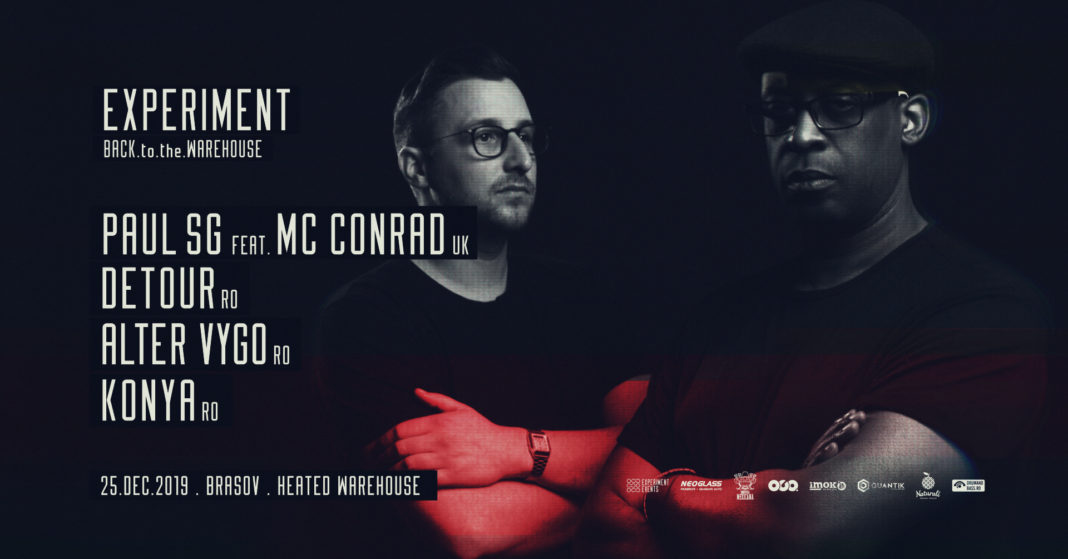 We Experiment once again and go back to the warehouse for another chapter of an unforgetable, heart-warming, soulful drum and bass music session.
And we are proud to announce that on our 12th event we as a community grew to invite the legendary MC Conrad, alongside the brilliant Paul SG. And with the support of our local artists Alter Vygo, Konya and Detour we’ll surely have a night to remember.
You are invited to join the Experiment!

Exploding out of 80s Hip Hop and Electro and immersing himself in the early 90s Rave scene, Conrad was one of the first truly great British MCs to emerge from this young and chaotic culture.

A regular fixture in warehouses, fields and clubs across all corners of the UK, Conrad grew with the music and, as Hardcore Rave mutated into what is now known as Drum & Bass, his musical journey led him to cross paths with an ambitious young DJ known as LTJ Bukem.

A now-legendary musical partnership, Bukem & Conrad took the seminal sound of Good Looking Records out into the world and back into the recording studio, culminating in Conrad’s Words 2B Heard project with MC DRS, which brought together like-minded vocalists, musicians and producers.

Having performed in nearly every country in the world, Conrad’s lyrics bring together thoughts, feelings and observations from all aspects of life, deeply connecting with his listeners at every event.

He is universally recognised as one of Drum & Bass’s most pioneering and respected vocal performers, delivering an electrifying show each and every time.

„Jazz is basically the finest music on this planet. The best musicians you can find are playing Jazz and it’s the most emotional music that expresses the whole range of feelings we humans deal with every day.
I discovered that for myself and Jazz just became something like a good friend that has excactly what I look for in music.
Translating some of this into my music and making it accessible to the crowd, to get people to appreciate good music and clever rhythms is my mission ever since.
I usually write tracks that combine both, a great deal of soulful jazz but also a heavy drum arrangement paired with a big warm bass. Ideally people who are far away from Jazz end up dancing for 2 hours slowly realising that they had the best time with some real music opposed to listening to the usual generic noise that is popular nowadays.”

Says Paul SG, who got a very early start in making music thanks to his parents – his father is an accomplished Fluteplayer.

After participating in „Musical Education for Kids“ at a very young age of four, five years old, his insistent banging of various kitchen utensils resulted in his father purchasing a drum set for his rhythmically inclined son. Paul SG has been on a life long journey in pursuit of beats ever since.

Being heavily influenced by his years as a drummer playing in various different styles of bands from rock, punk and grunge to funk, blues and gospel, including playing the kettle drum in a classical orchestra, this Bielefeld, Germany born producer currently based out of Vienna, Austria has become a true disciple of rhythm. Having learned that all music can touch people depending on the quality and depth, Paul SG brings a perfect mix of sounds and vibes that grabs you at the very core of your soul with each and every tune.
Working close with LTJ Bukem & the infamous Goodlooking Records for almost 10
years has taught him a great deal of professional attitude and perfectionism which Paul went on to put into his own label Jazzsticks Recordings.

„Being a resident DJ at London´s Fabric Nightclub for Danny (LTJ Bukem) has changed a lot for me,
it shaped my djing and got me out there more“

Paul has been playing all over europe in the past 7 years.
Paris, Barcelona, London, Prague, Zuerich, Berlin, Moscow and every other little town in between has been lucky enough to witness one of these special nights with such a unique and extraordinaire flair
and atmosphere that only Paul can create.

Working and releasing with over 25 different Recordlabels in the past 8 years including Goodlooking, Liquid V, Innerground, Shogun Audio, Fokuz and many more he has no intentions to stop but decided to concentrate more and nearly exclusive on his own label where he feels home alongside longtime collaborators and friends Decon, Flowrian & Pulsaar.
Paul has been busy not only creating original work but also went to do remixes for various labels in and outside of Drum and Bass including officially remixing Bonobo for Tru Thoughts in 2014.

After countless singles, various EPs, Paul SG released his debut LP „This Is Me“ on his
own imprint Jazzsticks Recordings in october 2016 featuring vocal artists T.R.A.C., Conrad, Angelina Dove & Grimm.

He started his activity at the end of 2009 as an Mc but after a year
he found his true passion behind the CDJ decks and now he mixes/produces music genres like:
Breakbeat, Breaks and Drum and Bass.
In the past few years he had the honor to mix in the company of some famous DJ-s like:
Noisia (NL),Wilkinson (UK), The Freestylers(UK), Stanton Warriors (UK), Fred V & Grafix(UK), Evil Nine (UK), DC Breaks (Uk), Blanilla (Ro) ,Missile(RO), MadLiquid(RO) and other outstanding DJ’s from Romania
He had the chance to show his true skils and passion at festivals like: Electric Castle Festival(RO),Untold(RO) Peninsula(RO), Delahoya(RO), MOX(RO) and other major event series.
For his line of productions and mixes you can check out:
https://soundcloud.com/detour-dj

Vygo was born in Brasov, a city quite in the center of Romania. He started playing music in 2005 at some underground parties called “Experiment” organized with his high school friends, followed by residencies in several clubs in his hometown, sharing the booth with artists like Nima Gorji, Livio & Roby, Audiofly, Satoshi Tomiie, Nic Fanciulli, Premiesku, Pushkarev or Djuma Soundsystem. He was also intrigued by visuals at that time, taking care of the visual side of the parties when he was not playing music.

His path drove him through the romanian electronic music scene and together with Aleka, his collegue, they got gigs in most of them big romanian cities, but also in the UK, Germany, Netherlands, France, Italy or Hungary.

Since 2012 he’s part of Proudly Made By Us, a team of good friends from his hometown responsible for well-known events such as “Dancing Mountains” or “Dor de Munte”, organized in the mountains of Transylvania. They’ve hosted many club events also, and alltogether he had the chance to play alongside the majority of the romanian techno scene collegues, and foreign artists like Onur Özer, Audio Werner, Vera, Ion Ludwig, Alex Niggerman, Boris Werner.

He prefers sliding trough different genres from minimal, to house or techno, simple or complex, deep or groovy, sometimes even atmospheric drumandbass, as Alter Vygo. The idea is the musical trip.