B: Because Michael Ende and I like bleeps and short sequenced sounds.

When did you start producing?

What sounds inspire you?

B: I look for sounds that are very raw thay means it leaves a lot of room for me to saturate, filter, resample, repeat. They can be a sample, a synth, a voice or very weird organic noises.

B: Yes, I’m curently taking piano lessons and even though I don’t know a thing has opened my eyes in the right moment. I plan to do a 80’s synth music band when I feel confident enough. I also experiment with live synths while mixing.

It’s also very important for me to find someone to do a duo or why not a trio to make music. He/She has to be self motivated, hard working and very patient, so if anyone interested reads, this please contact me ASAP!

B: Mostly TM, courtesy of Freenetik Kru but i also mixed in Bucharest alongside DJ Vasile and at Arena dnb at a Hospitality event. Also been in Deva, Cluj, Targu Neamt, Arad and i gig’d in Dresden-Germany.

B: Around march 2016 on Monochrome Music: 10-12 track LP ranging from emulating that 90’s rave sound going through jungle and some very dark melodic steppers. 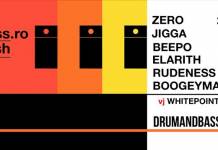